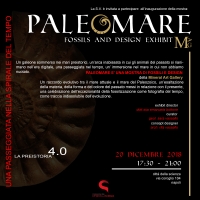 The Mineral Art Gallery, is a Neapolitan startup that was born after the passion for the Great Minerals and the Collection Fossils. It develops its concept around the nature of matter, from which everything originates, with the possibility of the same to be able to transform everything. It presents a fusion between manmade works of art and natural crystallizations that have been generated over millions of years. An amalgam that encompasses an energy and a temporal space memory that materializes in a contemporary present.

Creates and promotes works of Interior Design, such as structural elements or furnishing accessories, which resonate with a contemporary present, in which the search for balance and nature are increasingly present in the structural housing demand.

It opens the doors to a future rooted in the past and careful to create an awareness on the relationship between the path of a short human life on the planet Earth and the evolution of the same.

From the Paleodesign 2018 collection, the "Paleomare Exhibition" is born, which creates an evolutionary path between the current sea and the Paleozoic sea, reviving it in the 21st century with the help of the augmented reality offline 4.0.