Lapis lazuli are rocks with lazurite as their main mineral originating from the contact metamorphism between limestone and granite. The name derives from the Latin "lapis", which means stone, and from the Arabic-Persian "lazhuward", which means blue. Lapis lazuli occurs as impure compact masses containing minerals such as calcite, pyroxenes, amphiboles, mica, pyrite with sodalite and mainly haüynite, two silicates similar to lazurite. The color is often intense ultramarine blue, due to the presence of lazurite; not rarely faded and tending to purple green. The color, due to the presence of impurities, is not always uniform, so in large masses it appears to be sprinkled with yellowish spots, whitish streaks (calcite), with pyrite veins and spots that give the mineral the idea of being dotted with gold. Lapis lazuli has a vitreous luster, not very deep, and is opaque or slightly translucent on the edges.
The best known for a long time and where the most beautiful specimens are obtained, are the deposits of Badakshan in Afghanistan. In this locality three qualities of lapis lazuli are distinguished according to the color: indigo, blue color; asmani , light blue sky color; sabzi, greenish color. Other deposits are located in Russia, in the Chilean Andes, Burma, Angola, Pakistan and in the USA. It is also found ,in small quantities, in Italy near Vesuvius and the Alban Hills.
It is used to compose necklaces, bracelets, boxes, paperweights, bases of religious objects. Lapis lazuli was highly appreciated by the ancient people of India, Egypt, Persian, Mesopotamia; kings, queens and high-ranking people obtained rich seals from it. Particularly the ancient Egyptians cut several beetles from this mineral. Much used, especially in the past,  as upholstery for altars, columns, walls and particularly to compose mosaics.
Commercially, lapis lazuli has high value especially the one with more intense color and well-speckled pyrite (more intense and well-speckled color of pyrite). Large pieces are appreciated and of significant cost. 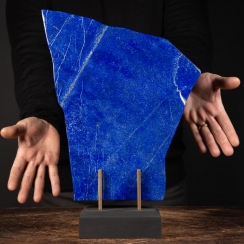 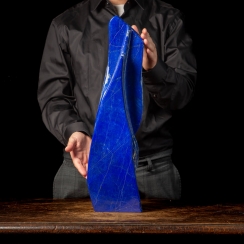 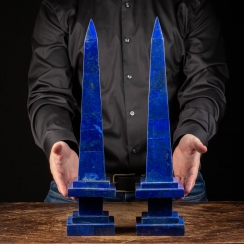 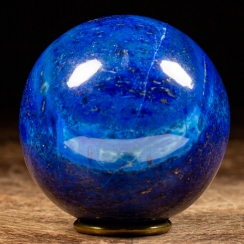 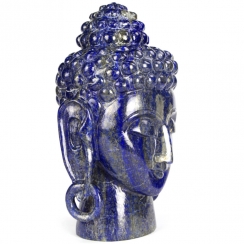 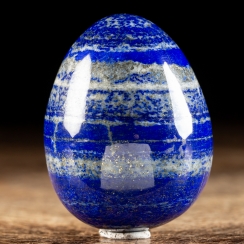 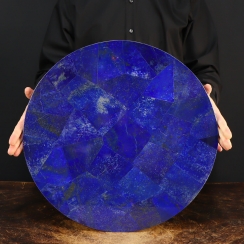 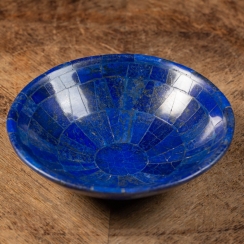